I’ve been spending a lot of time in the kitchen recently, and the bounty in the garden turns into a bounty in my freezer, my cupboard, and my belly. As beans and tomatoes pour in from the garden and the farm where I’ve been helping out, I’ve been looking for ways to preserve them.  I’ve canned salsa and pickles, frozen berries, broth, and pesto, and dried tomatoes and green beans.  I’ll be writing and posting a bit about salsa in the next week.

For now, though, here are a few pictures I shot while waiting for the water to boil so that I could blanch the beans.  An enameled strainer, our coffee-sack-turned-curtain, and the paper bag that held asian pears mysteriously gifted to us by my husband’s co-workers have found themselves observed and studied.

It is fall- without question and without doubt.  The sting of blackberry briars will soon turn to the mashing and processing of applesauce and woodsmoke will replace charcoal.  But for now, the water boils, the beans turn the brilliant green of grass after a summer of no rain, and our storage capacity fills. 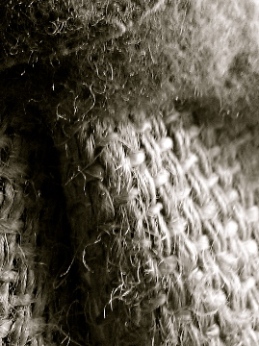 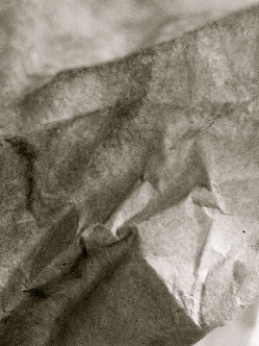 We call it the Lost Road, but that is not its name.  We don’t actually know the proper name of the pavement past the cement Jersey barrier, but to get there, head left from the lake and drive until the road meets its end.

When we first discovered this place, we were days away from packing our lives into a moving truck for the fourth time in one year and heading back to the southwest.  Dreams of sagebrush and rolling mesas mixed with yearning for a city we had not yet left and hopes and fears mingled with the drifting cottonwood and the hum of bees in the wildflowers.

We drove north, over the bridge that spans cities and states, and then headed out towards the unpeopled sand of the northern side of the Columbia River, a place at which we’d gazed wistfully from the river’s confluence with the Willamette.  We passed industry, then a gravel company.  We passed a community of houseboats and then a field of cows.

Road ends.  Four miles.  No turnaround.  The sign was orange against blue of the northwest summer sky.  We decided to head forwards, agreeing that we could always reverse if there truly was no turnaround.  And there, at the end, was a small parking area, which was more full of broken bottles and bags of trash than cars.  In fact, we were the only ones for miles.

After climbing the barrier, we ventured along what seemed to be a road, in a sense, or at least the memory of a road.  For a pace, the pavement travelled through torrid blackberry brambles and Queen Anne’s Lace.  And then, in spots, half the road disappeared, leaving a jagged precipice leering over the rocky shore of the Columbia below.  We learned to follow the small paths to the right of the road, which led us down into a meadow, through waist-high grasses and back to the road when it became whole again.

Along the way, we began to see the blackberries hanging heavy in their thorny havens.  Huge berries waited just off the path.  We grabbed handfuls, and fingers were soon stained purple, while forearms screamed with the scratches of the thorns we attempted to thwart.

I suddenly became aware of the magic of this place.  It was silent, save the cry of the ospreys, who dove from ramshackle stick nests into the water.  The light was the late-summer afternoon glow of sun from the west, backlighting the grasses and flowers and haloing leaves on the trees.  I was aware of the ache in my heart, the cry to stay here, in the northwest, in the house we’d come to love in the past six months of living there, and in the city that shared so many of our joys and passions.

But we ignored the signs to stay and said goodbye to Portland, only to be met with a reality that was not as pictured in New Mexico.  And so, only six months later, we returned to the city, which by that point was shrouded in rain and reeling from two feet of snow over Christmas.  Much as we were prepared to roll in reverse if the road had ended with no place to turn around, we reversed our course back to Portland, with the hope that perhaps this truly was where we were meant to land.

It wasn’t until the next summer that we remembered the Lost Road, and the blackberries, and ventured back.  We found a path down to the river and scrambled over driftwood to sit and stare at fisherman amidst the fall salmon run.  We brought boxes this time and filled them with blackberries, which have a scent unlike anything I can describe.  They lasted through the winter, eaten in oatmeal, and crumbles, and right out of the freezer.

We told people about the Lost Road and roughly described how to arrive at its entrance.  One friend took a wrong turn and found herself in the midst of target practice and men who spoke only Russian.  Two co-workers ended up wandering through a marsh at a wildlife refuge.  Secretly, we celebrated each time the road and its magic proved to belong only to the birds, the water, and us.

The next year, we were just shy of five years of love and life and adventuring together.  I made a breakfast picnic, with crepes and strawberries and lavender whipped cream.  I put coffee in a thermos and orange juice in a glass jar, and we trekked along the Lost Road, noting places where flooding had removed more pavement, and where other things remained much the same.

We walked down to the shore, only to find that there were hundreds of boats waiting for the running salmon, and each one was moored less than one hundred meters offshore.  We chose a picnic spot slightly hidden behind the reeds.  I turned to lay out our bounty and turned back to find a ring, a nervous smile, and a question.  I answered and we celebrated our engagement by picking blackberries side by side, as the sun rose higher in the east and the meadow released the sweet smell of hay. 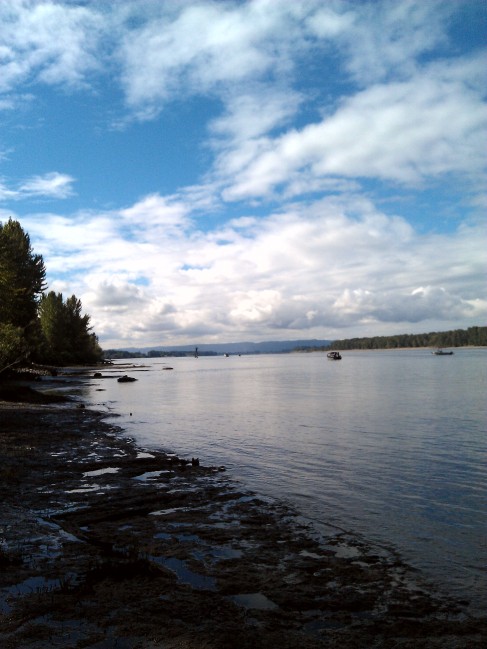 We returned to the Lost Road in November, much earlier than usual.  I carried the wooden box with our dog’s ashes and my then-fiancé led our new dog by the leash.  Our hearts ached from unexpected loss and the stress of buying a house and setting up home yet again.  We spread Atticus’ ashes amidst the roots at the base of a cottonwood, which clung to the sandy embankment.  We imagined him watching freighters as they travelled up river and down river, moving cargo to and fro.  We left him there, on the Lost Road, to join the magic and the spirit that was already omnipresent in that place. 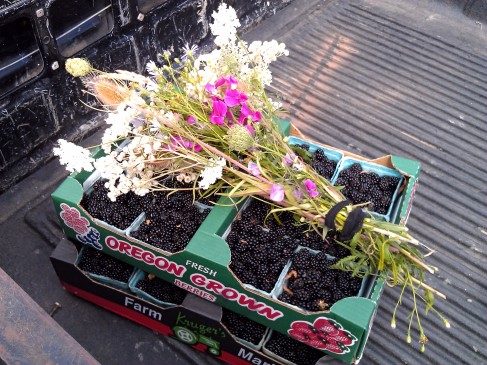 Engagement berries.  The blackberries in our freezer lasted until our wedding the following July, and we returned in the end of August to pick berries, wade in the river, and enjoy the place.  We walked to the other end of the Lost Road, where we found a fence, and a no trespassing sign.  We prefer the middle regions, where cars can’t venture and eagles soar from tree to tree, guiding berry pickers on the path.

This year, we returned yet again, rising early and driving through fields still misty in the cool morning.  We arrived prepared- with clippers for the thorny branches, boxes for the engagement berries, and long sleeves and pants to prevent the brambles from clinging to us for dear life.  We picked with a purpose and filled two full flats quickly.  We hid them in the shade and led our dog to the water’s edge, where she romped and frolicked, bounding from tuft of grass to muddy bank to puddle and back.  We stood and gave each other our wedding rings and said that we were home.  The fishermen served as audience yet again, but they politely averted their eyes.

I sense that one day, we will arrive and find the Lost Road inaccessible, either due to rain and flooding having washed away the last pieces of pavement, or because it sometimes seems that the most special places are the ones deemed off-limits.  But as of yet, it lacks No Trespassing signs, and a morning there continues to produce berries and bouquets of wildflowers.

Four years ago, the Lost Road was an unknown destination, with dubious exit strategies.  Now, it is a compass bearing for quiet, and solitude, and remembrance.  The Lost Road is our map.  It is a home base for our wanderings and a place to postpone worries and focus on the task at hand, which usually involves picking berries, escaping brambles, and wandering through paths in the dewy grass. 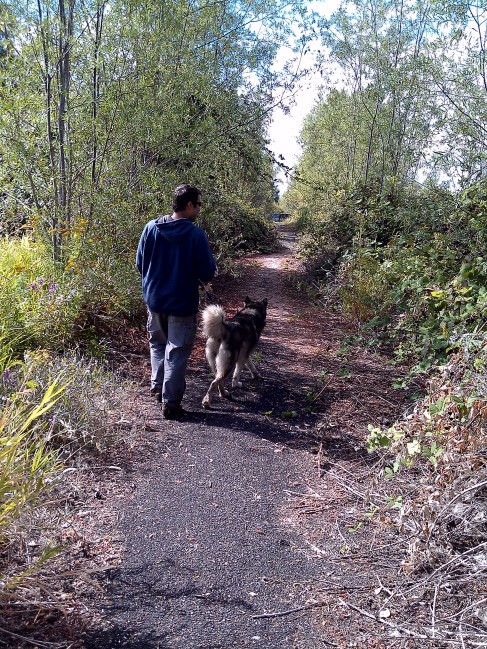 Naked tomatoes, waiting to be processed. I helped out my friends at Big Fork Organics and they were kind enough to give me tomatoes. I’m in the middle of turning them into salsa, using the Blue Book of Preserving‘s Zesty Salsa recipe. I’ll post the recipe and finished results if it works out. 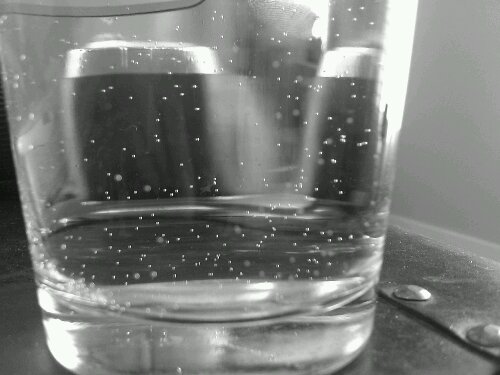 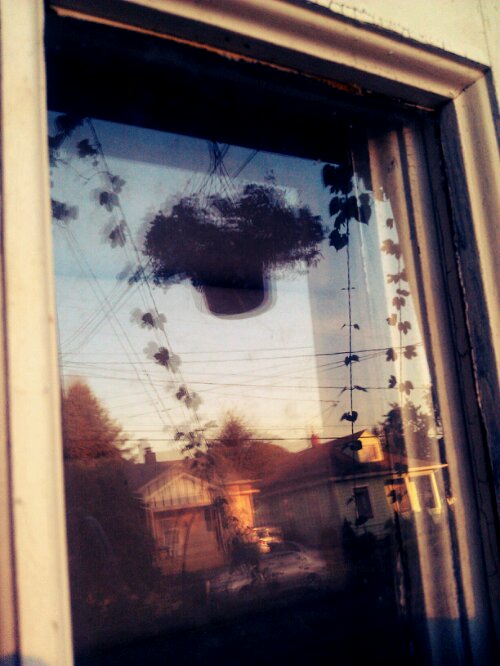 This photo was submitted to the I Heart Faces photo challenge – www.iheartfaces.com

Posted by thesoundofceleste | Filed under Photography 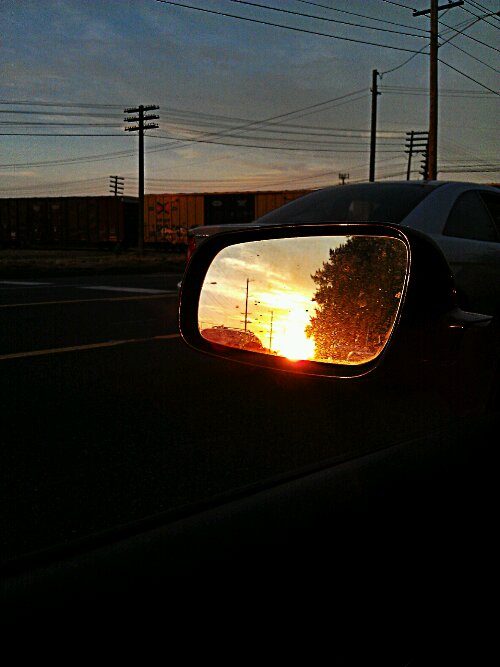 Aegean, off the coast of Turkey.

Posted by thesoundofceleste | Filed under Photography